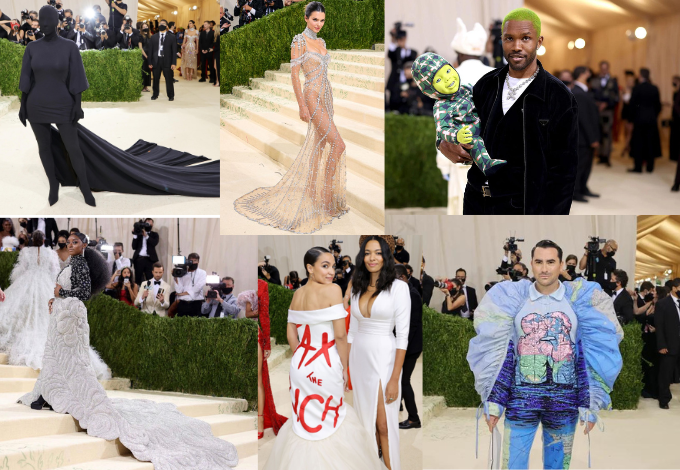 The Most Lavish Outfits In The Met Gala. MTV Video Music Awards 2021 were organized inside the Barclays Center in Brooklyn, New York on Sunday, 12th of September, 2021. after postponing two times due to the coronavirus pandemic. The American rapper and singer Doja Cat who is also nominated for ‘video of the year’ hosted the show.  It happens for the first time in the history of MTV awards.

Talking about winning celebrities, we have Beyoncé with her 29th award, Lil Nas X, Olivia Rodrigo, and BTS with three awards each, Billie Eilish and Justin Bieber with two awards, and Blue Ivy Carter; the youngest winner in our hit list. Justin Bieber, Ed Sheeran, Polo G, Chloe, Ozuna, and many others had performed at this big night.

Well, discussing MTV awards while not considering Red Carpet Looks of multiple celebrities is an impossible thing. MTV Awards always become a highlight for its extreme fashion aspects and this time, it goes for ‘In America: A Lexicon of Fashion’for which celebrities choose some remarkable appearances for the red carpet.

Kim Kardashian, a bold and beautiful model came out of the box for MTV awards Red Carpet look. She has chosen a Black Balenciaga bodysuit with a latex black mask on her face following her husband Kayne with the same all-black look. She has been mocked a lot on social media for her appearance and became a hot topic of the week. According to the sources, she wants to develop an inspirational new fashion statement with her attire but people called it ‘distasteful’.

Kendall Jenner put on a sensual turn with her classic see-through Audrey Hepburn’s ‘My Fair Lady’ inspired Givenchy gown. The gown was supported with nude underwear and embellished full sleeves with gloves and choker. But, according to the audience, it was more intimating and attention-seeking attire than a fashion outfit.

Frank Ocean makes an entrance with a velvety coat and green robotic baby doll wearing a galactic-printed onesie whose green color was matched with Ocean’s hair color. The entire attire was a bit awkward and bizarre for an Award ceremony. But, the singer called it a part of America’s trends.

Alexandria Ocasio-Cortez, a democratic congress socialist, far from politics, made a controversial political statement with her attire on the Biggest Fashion Night. She has come with a white gown by Brother Vellies having words ‘TAX THE RICH’ on it. It was a bit irrelevant to the main theme but provocative at the same time.

Simone Biles makes her debut in MTV Awards 2021 with a much heavier 28lbs Swarovski crystal-embellished white gown with the floral printed black sleek bodysuit. The entire look was seeming anomalous and obdurate. It was heavy enough that she has to bring an entire team with her to take care of her dress. She also added by herself that it is difficult for her to carry the dress.

Dan Levy also made his debut in MTV Awards 2021 with a  Loewe’s Jonathan Anderson and Cartier designed a multi-pastel colored outfit having puffed sleeves and a world map with a couple intimately kissing each other on his chest. It was a confusing and uncanny look for the audience. Also, it was a bit off for the Red Carpet presence.

Conclusion Everybody wants to look unique and different in their way and that’s how many celebrities steal the limelight. Many of them were carrying their costumes amazingly and many became the reason for public criticism but this is how the red carpet works, right?